Gabi Simpson has re-committed to the Queensland Firebirds ahead of the 2022 season, which will see her bring up her 10-year milestone in purple.

Simpson arrived at the club in 2013 as an exciting young talent from New South Wales, now she is a respected leader with two ANZ Championship titles to her name.

The 28-year-old said she was confident the club was on the verge of something special, making her decision to stay at the Firebirds an easy one.

“Since I first moved up when I was 20, the club has been my home, so now to be signing up for my tenth season here is extremely special,” Simpson said.

“We’ve worked really hard this year and done a lot of groundwork to set a foundation that can put out really good performances, and I think what we learnt will be absolutely vital.

“And this group, I have never seen a group more driven to get the success that we want for this club.” 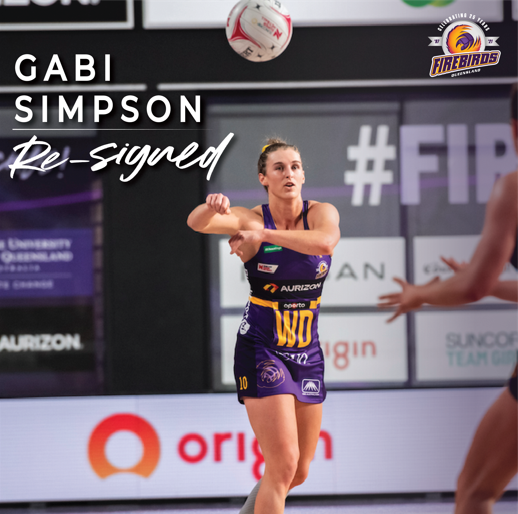 The decision from the ever-reliable wing defence, who has captained the Firebirds since 2017, has coach Megan Anderson delighted.

The Firebirds coach said she can see Simpson again playing a big role next season.

“Gabi is our ever-smiling assassin who just seems to come out of nowhere for her intercepts,” she said.

“She lifts her teammates with her shut down role at wing defence and her attack through the court gives us so much strength.

“I think 2020 and 2021 have been her best seasons recently and I’m looking forward to her continuing that great form.”

Simpson joins 2021 MVP Kim Ravaillion as well as exciting duo Lara Dunkley and Kim Jenner in re-signing with the Firebirds for 2022.