Johnathan Thurston isn’t the only sporting star walking the streets of Townsville these days…as a born and bred local, Kim Jenner, continues to triumph in success as she ticks off childhood dreams.

Following a break-out season last year with the Queensland Firebirds, Kim deservedly earnt her spot in the Australian Diamonds Squad which recently toured to New Zealand for the 2021 Constellation Cup Series.

The dynamic, speedy and assertive defender has entered her fifth season with the Firebirds this year and it’s safe to say we’re all just a little excited to see what the 23-year-old will bring to the table this season.

“I really enjoyed growing up in Townsville, it’s a really good community to be a part of, especially in a netball sense.”

“There’s heaps of stuff to do, but it’s also small enough that you don’t get lost.”

Kim made the move to Brisbane in 2015, after spending her final few years at Pimlico State School, flying back and forth between the two cities for training commitments.

“At first the move was pretty scary; you’re moving away from family and everything you know, but it’s lucky that I knew some girls through netball in Brisbane, because they made the move so much easier.”

Although by this stage our Kimmy J had her heart set on netball, while growing up she played an array of sports…interestingly starting out with gymnastics.

“When I was really little I used to trip over my own legs, so mum got me involved in gymnastics to try and get me a little more coordinated. It didn’t go too well, I’m still very uncoordinated,” she said laughing.

“I played lots of sports growing up, I did swimming, touch, netball, soccer, basketball, athletics…I’ve done a bit of everything.”

As a youngster, one of Kim’s goals was to make the Olympics for athletics, however the list of career dreams didn’t end there.

“When I was really young, I didn’t think netball was on the cards for me, I loved playing it, but never really thought it would be a possibility to play professionally.”

“I loved athletics and making the Olympics was a goal, but I also really wanted to be a dentist and start my own dentistry, as well as wanting to be a physio at one stage. Netball won out.”

And aren’t we glad that it did. Kim’s family of five were a huge reason netball came out on top.

“My family are my biggest support; they’ve been with me through thick and thin. I’m so grateful to have such an amazing family that have always been there for me, couldn’t have asked for anything better.”

“They come down to watch as many games as they can, and I talk to them on the phone quite a lot.”

With an older sister (Caitlin) and younger sister (Sarah) on either side, Kim gets to enjoy catching up with Caitlin locally as she too is based in Brisbane and gets to see Sarah whenever she heads home. 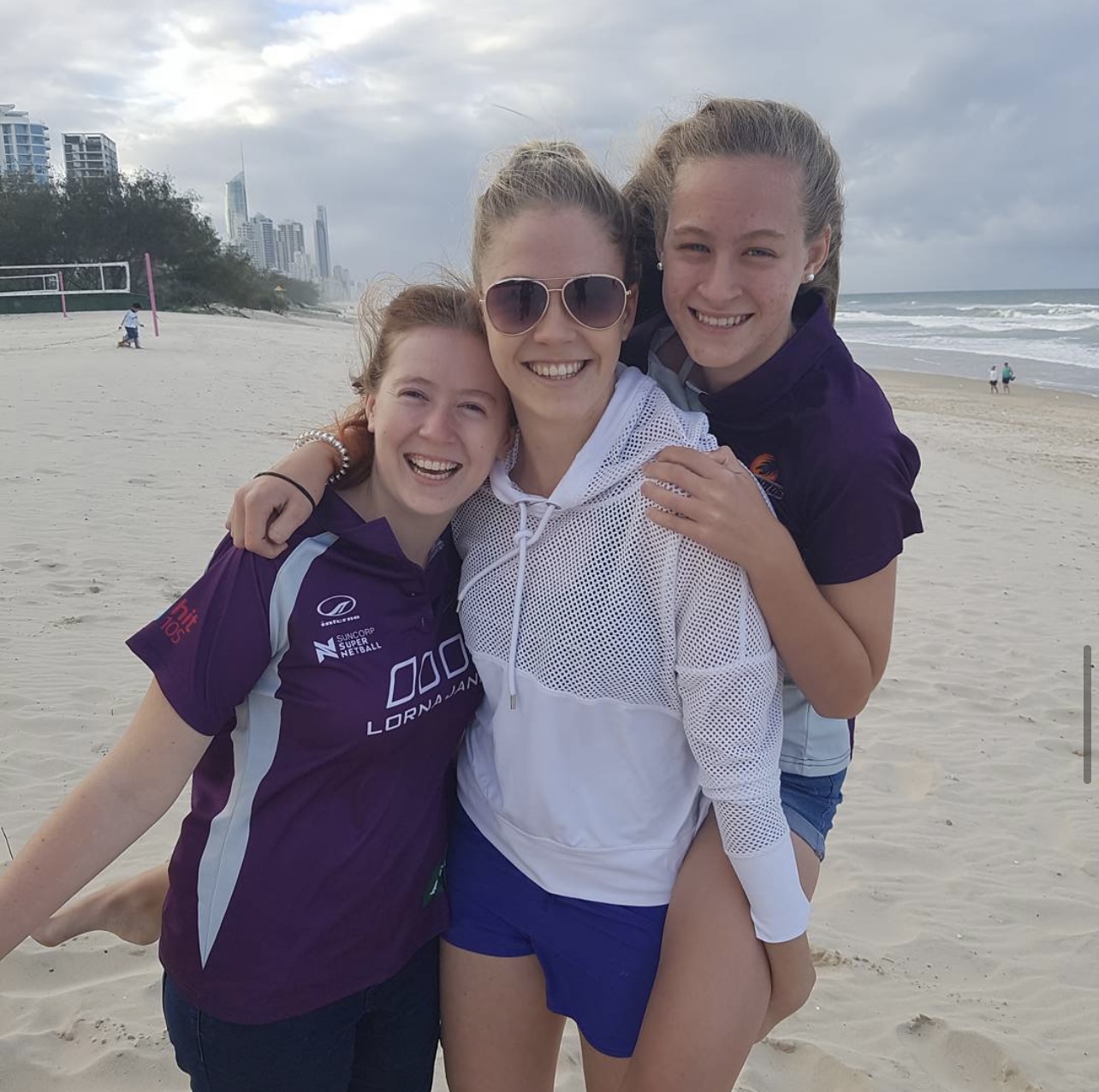 “I was pretty close with my little sister growing up, so it was pretty hard moving away from her, but it’s so cool to see her grow up into her own person.”

“It was also really exciting watching Caitlin get married a few months ago! It was such a fun day and it was really cool to see her so happy.”

Although a plane trip away or very long drive, Kim remains very close with her family.

However, her home away from home for the past two years has involved living with Queensland Firebirds teammates Lara Dunkley and Rudi Ellis.

“I really enjoy living with teammates, I think it brings a really fun element to training and game days. We’re on the same schedule, which means we can cook together and go on adventures etc because we have the same days off. It’s been really cool.” 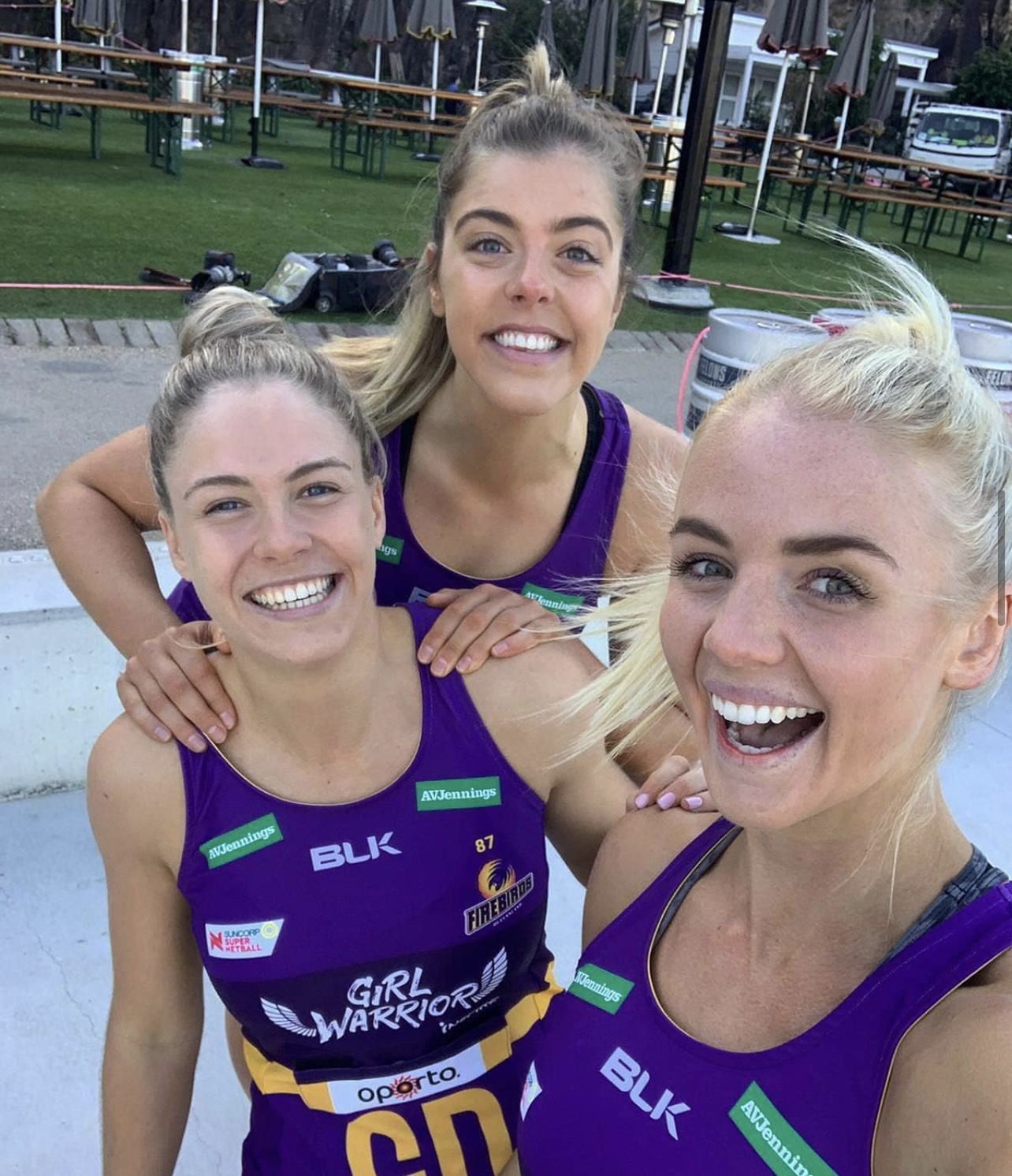 On certain days off the adventuring has to be placed on hold, as Kim continues her studies in Health Sport and Physical Education at the University of Queensland.

“The goal is to be a PE/Science teacher when I finish netball. I really enjoy that I’ve got something to do outside of netball, it keeps me busy.”

“When I don’t have Uni or training, I love getting outside of the house, we’re so lucky to live so close to a beach with so many amazing outdoor places to explore.”

However, the adventure days this year have been limited, with Kim only recently returning from her overseas tour with the Australian Diamonds in New Zealand for the Constellation Cup.

“It was very exciting to get the call up to the Diamonds, it’s something that you dream of growing up, you watch them playing on TV and then to think that you’re actually in the squad, is pretty surreal.”

“It was incredibly special to be given a yellow dress, it was a real pinch me moment.”

From start to finish, our Diamond squad members from the Firebirds were away from home for almost six weeks.

“It was a crazy ride, but so exciting every step of the way. There were different challenges and experiences, but it was all invaluable. Overall the experience was incredible.”

Although Kim didn’t get her chance to shine on court while in New Zealand this time, she “took so much from the experience. I guess you always want to play and be out there with the team. But just being able to be there, linked up with the other girls singing the national anthem was incredible.”

Now we have our star defender back!

“I’ve missed the Birdies environment so much, it’s so exciting being able to knuckle down with the group again. Everyone’s really motivated to do well.”

“I think that we ended the season last year on a real high, we’re all working our butts off to give it everything we’ve got, and it’s just so exciting to see what we can produce out there.”