The Gold Coast girl, Gretel Bueta, who brought her colour to the netball stage, continues to paint an awe-inspiring pathway for all involved in the sport, after giving birth to her first child, Bobby.

One of the most sensational athletes to step on the court, Gretel continues to change the way netball is played, one lay-up after another.

Entering her seventh season with the Queensland Firebirds, we are excited to see what the former basketballer will bring, following a year on the sidelines during 2020.

“I was born on the Gold Coast and we lived across the road from the beach growing up. So, every day after school, especially in summer, we’d head across to the beach.”

“On the weekends we’d go for swims…sometimes three or four a day! Dad loves to surf, and he tried to make us into little surfers, but we weren’t any good, we’re too lanky.”

Although Tony and Janet Tippett (Gretel’s parents) may not have ended up with their little surfing trio, they are instead the proud parents of three incredible athletes who have taken the Australian sporting sphere by storm.

With “two older brothers” Kurt and Joel Tippett, previously playing football in the AFL for the Sydney Swans and North Melbourne Kangaroos respectively, Gretel was no stranger to sport herself.

“Growing up I did touch footy, athletics, swimming, tennis, soccer, basketball and netball…we used to do it all.”

Do it all she did. After switching from elite basketball to netball in 2012, Gretel had the ability to transcend her code switch by bringing her trademark lay-up and unorthodox style with her.

Following the switch, and eight years in the sport, Gretel was awarded the highest honour in Australia, the Liz Ellis Diamond.

But there’s not much this lady will settle for, earlier last year Gretel married the love of her life, Niko Bueta and started her family of three, as baby Bobby entered the world.

“I met Niko on New Year’s Eve in 2015 and we didn’t know a thing about each other, besides him having a really strong Kiwi accent. But one thing I soon found out was that his favourite netballer was Geva Mentor…I was a little bit cut, so I had to work on him.”

“He’s the calmness to the crazy world that I live in, so after five years together we’re married and have our little boy, Bobby.” 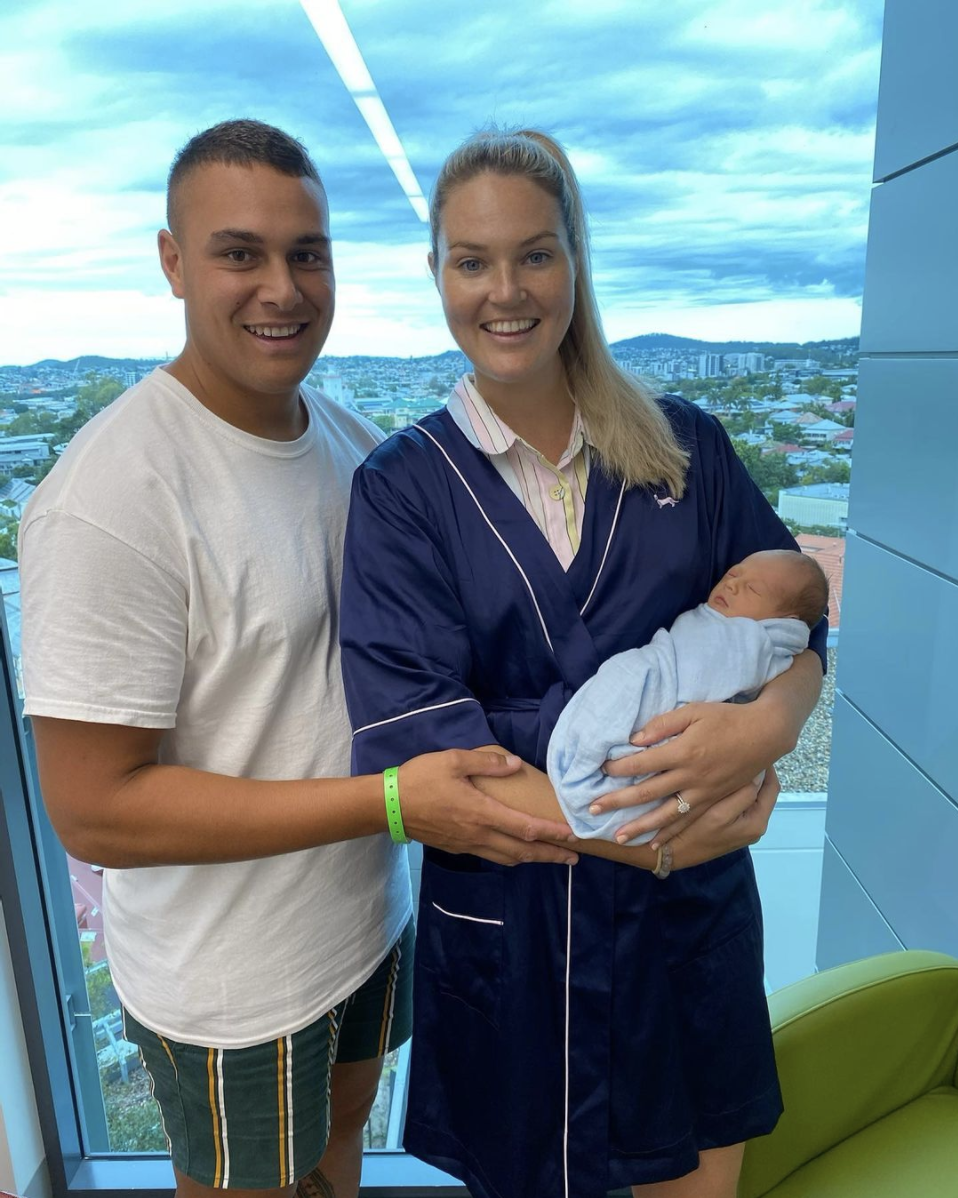 On the fifth of January this year, Gretel and Niko welcomed Bobby into the world, leaving them both absolutely smitten.

“It’s just so exciting every time I see him - I swear after every nap he’s grown! Sometimes you just want time to stand still, but at the same time you want to fast forward to when they can run around, and you can do all these fun activities with them as well.”

“Being a mum is the best job ever, it has opened my eyes to a whole new world. It has also made me really appreciate women on a whole new level, women are just amazing.”

This woman is amazing. She, alongside fellow teammate Kim Ravaillion and coaches Megan Anderson, Clare Ferguson and Katie Walker are all paving the way for female athletes that choose motherhood as well as a career in sport.

“They’re all super mums! As well as all of my close friends who are mothers away from the court, like Geitzy (Laura Geitz). It has really helped having these people around me, they’ve all given me amazing tips so far and I’m really enjoying going through this stage of life with them.”

“They say it takes a village to raise a child and it couldn’t be any more true, which I’m working out. But if you’ve got a good support network around you, it’s very doable. I’m really grateful for Netball Queensland and the Firebirds, they’ve been amazing.”

This is something Gretel certainly has, with Niko and her family playing a huge role in the support of Bobby while she juggles Firebirds commitments and being a mum.

“Niko is such a hands-on Dad, which I’m really grateful for. While I’m at training he will just take Bobby – bath him, feed him and put him to bed, no worries.”

“Mum and Dad have been lifesavers as well, even though Bobby is their fifth grandchild, I still try to steal them as much as possible to help out. They’re amazing. Family is everything to me, I think it’s a big part of why, why you do things or why you play netball and things like that, because I want to do well for my family.”

Now with a family of her own (including three-year-old Chow Chow, Winnie), a degree in Nutrition and Dietetics and a passion for coaching, Gretel hopes to balance the things she loves as she looks forward to the 2021 season.

“Health is a big passion of mine, so I hope one day I can use my degree. I do enjoy coaching young girls as well, I get so much fulfilment from it, seeing the enthusiasm and how much the girls love the game is something that really motivates me.”

“I’m also really excited for the season ahead. It was so inspiring sitting on the sidelines last year watching the team grow, and it’s something that I really want to be part of, I can’t wait. I think we’re all raring to go.”

With a team of medical and physical experts surrounding Gretel, there is a plan in place and milestones to reach, before the star can return to the purple dress.

Head of the Strength and Conditioning program at the Firebirds, Brynley Abad, is working closely with Gretel to aid her return to the court.

“She’s right on track, she is ticking off milestones from week to week. She will return to court this week in non-contested scenarios; in two weeks she’ll return to contested work and about a week later we’ll start to blend her into some games.”

“It’s actually been quite a huge process; we’ve been working closely with Gretel’s obstetrician who has been really helpful. As well as working with head coach Megan Anderson and making sure our physios Sam and Kerry are on the same page.”

“But if all goes well and she continues to tick off the milestones that she is, she’ll make round one, absolutely,” Brynley affirmed.

We look forward to seeing Gretel step back out on the court and make our purple family proud.