Inspired by her family who shaped her into the person she is today, Gabi Simpson epitomizes what it is to be a Firebird as she continues to leave her Purple Family in awe.

The tough and tenacious captain is considered one of the best defensive mid-court players in the world, representing the Australian Diamonds on many occasions and winning the prestigious Liz Ellis Diamond Award in 2017.

A dynamic character on court, her speed off the mark, strength and hard work ethic is inspiring generations of young wing defenders. After a promising 2020 season, Gabi is determined to lead the Firebirds into finals this year. 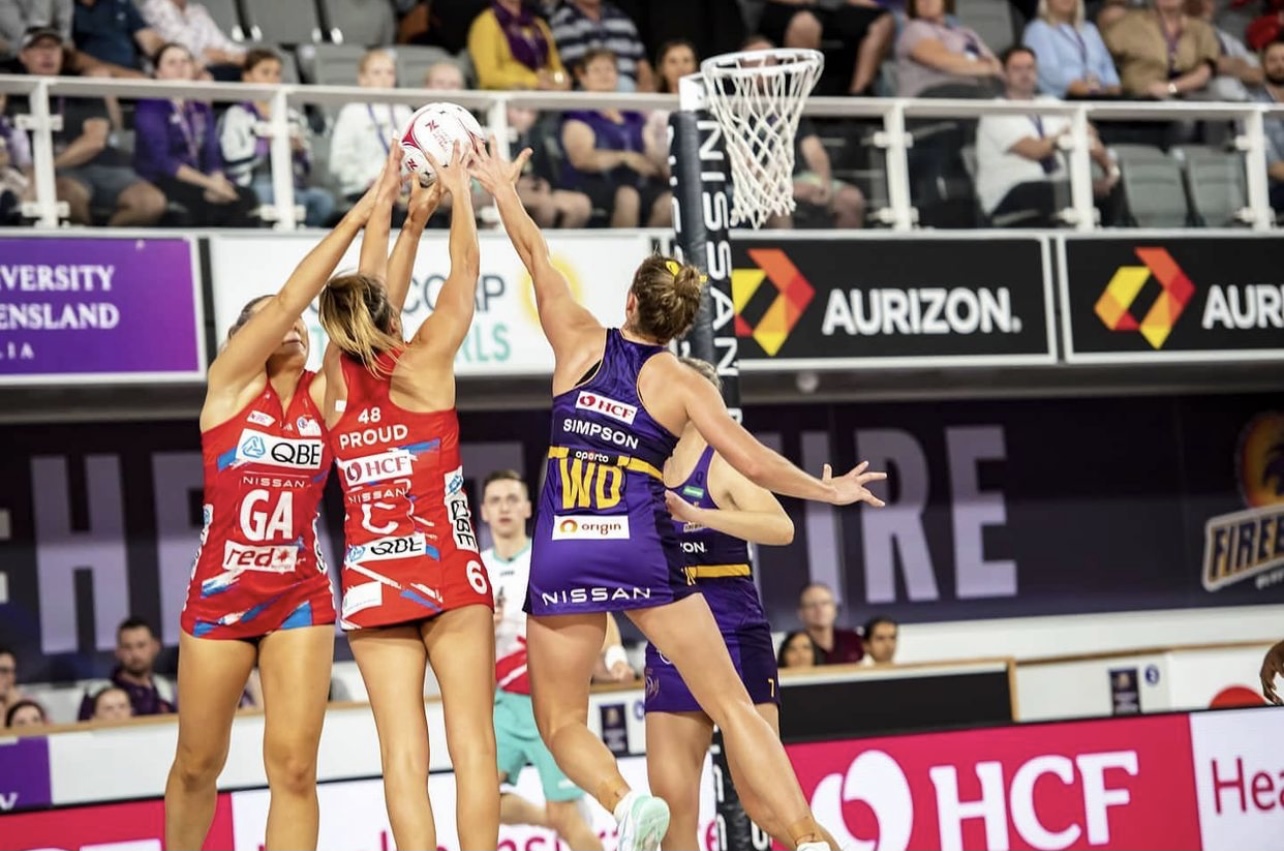 “I grew up in the Eastern suburbs of Sydney, Randwick, close to the beach. So, on a hot day, when you’ve got no money, you just want to hang out with your friends – you’re sorted!”

“I’ve also got some really amazing friends from school, there’s a group of ten of us that are all still extremely close.”

Although there’s a plane trip now between Gabi and her tribe of ten, they still make the effort to keep in touch regularly.

“We chat all the time, they are a really important part of my support network. I love going back to Sydney, especially over Christmas, so I can just spend time with them doing normal things like catching up for dinner.”

In 2013, she packed her bags and head to the sunshine state to begin her Firebirds journey, the transition was made a little easier when she was welcomed with open arms.

“It was hard leaving family in NSW as they were my biggest support network, but I had team members like Laura Geitz and Chelsea Pitman, calling me saying they couldn’t wait for me to get up to Queensland before I had even left.”

“I felt early on that I was joining something that was bigger than just me coming up to play netball, so it made the transition really easy.”

Our captain first moved up north and lived with this years’ newest re-recruit, Kim Ravaillion, where the two centre court buds experienced Brisbane life for the first time together.

“It was cool experiencing the new training environment as well as living away from home together! Although we did struggle going from living in Sydney where the beach is at your doorstep, to having to make a day trip up or down the coast.”

“So, we’d be sitting there thinking what do we do…it's hot, we have no money, we want to chill out, where do we go?”

This year marks Gabi’s ninth season for the Queensland Firebirds and is her ninth year living in Brisbane – surely we can call her a Queenslander now!

“I think I’m lucky enough to call two places home. I’ve been able to make Brisbane home, mainly due to the netball community up here as well as the friends I’ve made along the way through Uni.” 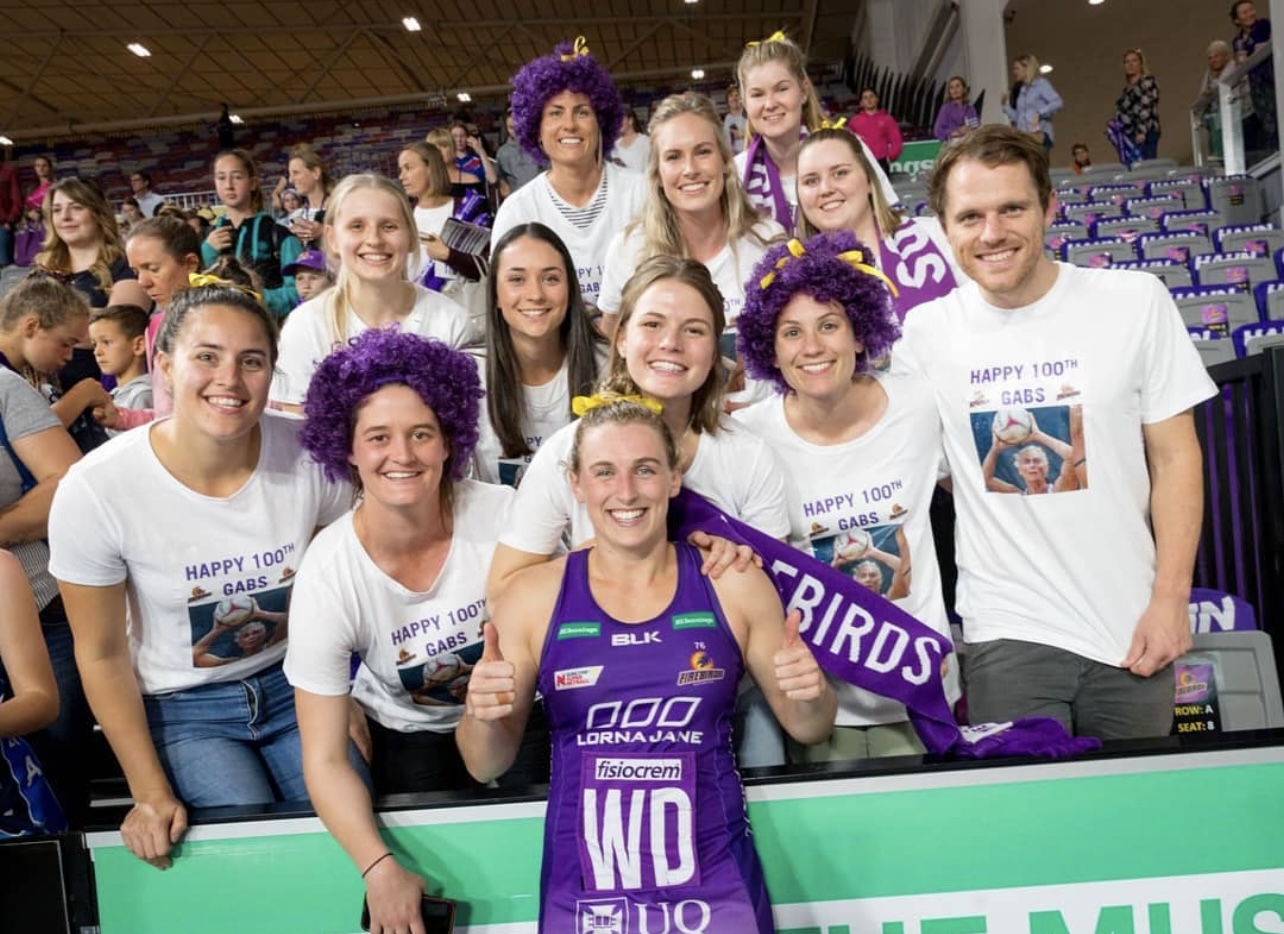 “So, I think I’d definitely call Brisbane my home, I really love Queensland.”

Family has been a common theme of importance for all of our birdies and it’s no different for Gabi, who believes that her family has shaped her into the person she is today.

“My Mum, Dad and Sister would probably be the people that inspire me the most, and they have shaped me into the person that I am today. They are all such selfless people.”

Gabi’s Mum (Janene), Dad (Jim) and Sister (Emily) are very passionate about netball and watching their daughter take an intercept or five. They are also invested in changing the lives of people with disability.

“Mum and Dad work to make lives better for people with intellectual disability, they are really big advocates in this space and have pushed that their whole lives.”

“I find what they do extremely inspiring and I think with netball we are so lucky because we are given this platform to have a positive impact on people’s lives. The reason I see it this way is because of what my parents do and the values they have instilled in me.”

The importance of family has been a theme the Firebirds have embraced this year, something that has trickled down from the close-knit families they have at home.

“Family is so important to me. They are the people who give you unconditional love, know how to pick you up when you’re not having a great day and will celebrate with you when something great happens.”

Growing up, Gabi knew she wanted to be involved in sport, but a holistic approach to life was just as important.

“During school I was really set on not being pigeonholed into being a sports person, I loved academics and learning and wanted to put a big focus on being a well-rounded person.”

That’s exactly the approach Gabi has continued to have since leaving school, as she enters her eleventh and final year (fingers crossed) of studying Physiotherapy at the University of Queensland.

“I’m studying Physiotherapy, I have been for eleven years and I’m very hopeful that this is my last year – only two placements to go!”

“Physio is something I really wanted to do because of the impact that my Physio's have had on me over the years – both with their ability to get me back on court and the mindset - they have helped me grow as an athlete and person.”

Over the years Gabi and her career passions have evolved slightly, with an interest in the personal development area emerging.

“I also have an interest in people’s minds and personal development, essentially working to get the best out of people. It’s an area that I love within Physio and outside of it.”

“It’ll be interesting to explore how I can find a job that can merge the two and use the skillset that I have developed through studying Physio and being a netballer.”

Time for placement hours was limited in the earlier weeks of the year, as our captain was overseas in New Zealand with the Australian Diamonds, for the Constellation Cup tour.

"Because I haven't been a part of the Diamonds travelling squad for a while, it was such an amazing feeling to be standing out there with the girls again, singing the national anthem in the dress."

With the main focus now, on leading the Firebirds to the 2021 Suncorp Super Netball Grand Final, Gabi is excited by the group and what they are capable of.

“This is now my fifth season in the captaincy role and one of the things I love most about it, is seeing these amazing young athletes grow into amazing woman and netballers – with smarts and grit in the way they play.”

The other aspect that is so special about this season, is the strong relationship between players and staff that fall under the Netball Queensland/Firebirds umbrella.

“It’s bigger than just the ten of us who are playing netball, you can feel the strong connection with Netball Queensland and their support. We’re all going towards the common goal of ensuring the Firebirds can be the best they can be.”

“The fans have been with us through thick and thin, we’ve had some great years, we’ve had some really hard years but the fact that they’ve hung around and they’ve stuck with us, they’ve ridden the highs and lows with us, it’s just special to be a part of that.”