In 2013 the Queensland Firebirds took a chance on 19-year-old young gun Kim Ravaillion, a chance that led to two back-to-back grand final wins and the continuation of a unique team culture that remains to this day.

Kim’s speed and ability to play multiple positions on court, also led to her successful career with the Australian Diamonds, where she collected two gold and one silver medal in the 2014 and 2018 Commonwealth Games.

Although she may have left us for the dark side (Collingwood Magpies) temporarily, she has returned ‘home’ in even fitter and finer form. This time sporting an engagement ring, as well as introducing plus one, baby Georgie Treloar, who has stolen the hearts of her parents as well as the entire Firebirds family.

“I grew up in Strathfield in the Western Suburbs of Sydney. The suburb has changed a fair bit from when I was growing up though, we used to roam the streets with friends, but I believe it has changed a bit now.”

Kim remains thankful she grew up where she did.

“We were lucky enough to grow up with a pretty big back yard, where we had a playground, quad bikes and a house that backed onto a creek.”

“We lived our childhood outside, no video games or stuff like that and that’s something I want to instil in Georgie – for her to get out and enjoy the environment around her.”

The outdoorsy childhood was shared with twin sister Jess and older brother Chris, who currently live in Melbourne and Sydney respectively.

“Jess is my best friend. I’m so lucky to have been born with someone, I’ve always had a friend with me in life adventures.” 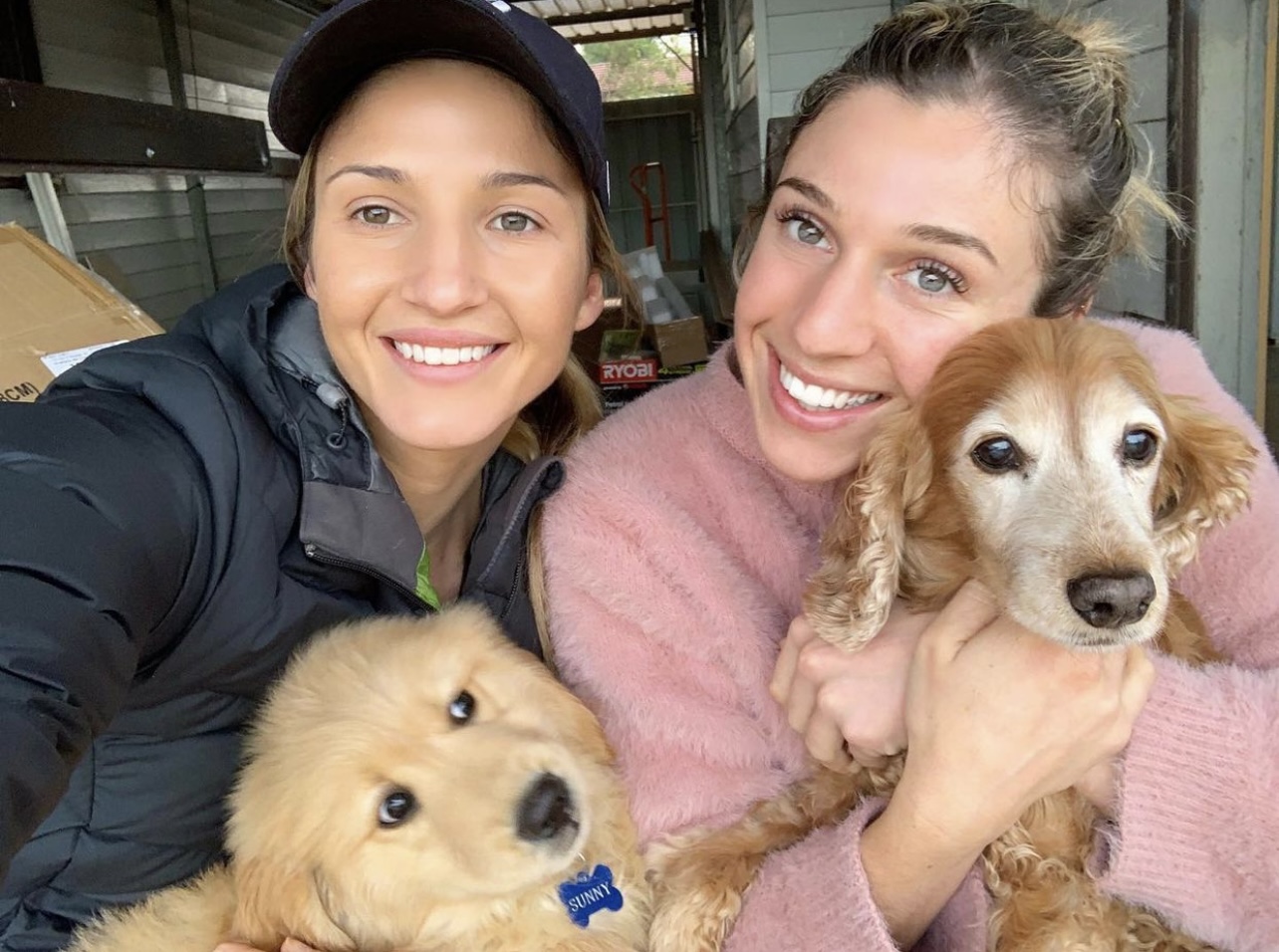 “Chris, who’s almost 30, wishes he had a brother, but he’s stuck with Jess and I. We’d always fight and play sport together, it’s where we got our competitiveness from! I really love our past and what we got to do together.”

At age 19, Kim was offered her first playing contract with the Firebirds, the experience so great, she could see herself living in Queensland long-term.

“I loved it, it made me realise I wanted to live here for the rest of my life.”

However, the young gun sought after a temporary cold change, whipping out a puffer jacket for the next four years of her life where she joined the Collingwood Magpies ahead of the first season of the new SSN competition.

The world works in mysterious ways, and although “netball wasn’t amazing, life was really nice down there. I ended up finding my life partner, Adam.”

“We are so similar as people and at the time that we met, we were going through a similar stage in life where we weren’t really enjoying our sport, so we connected.” 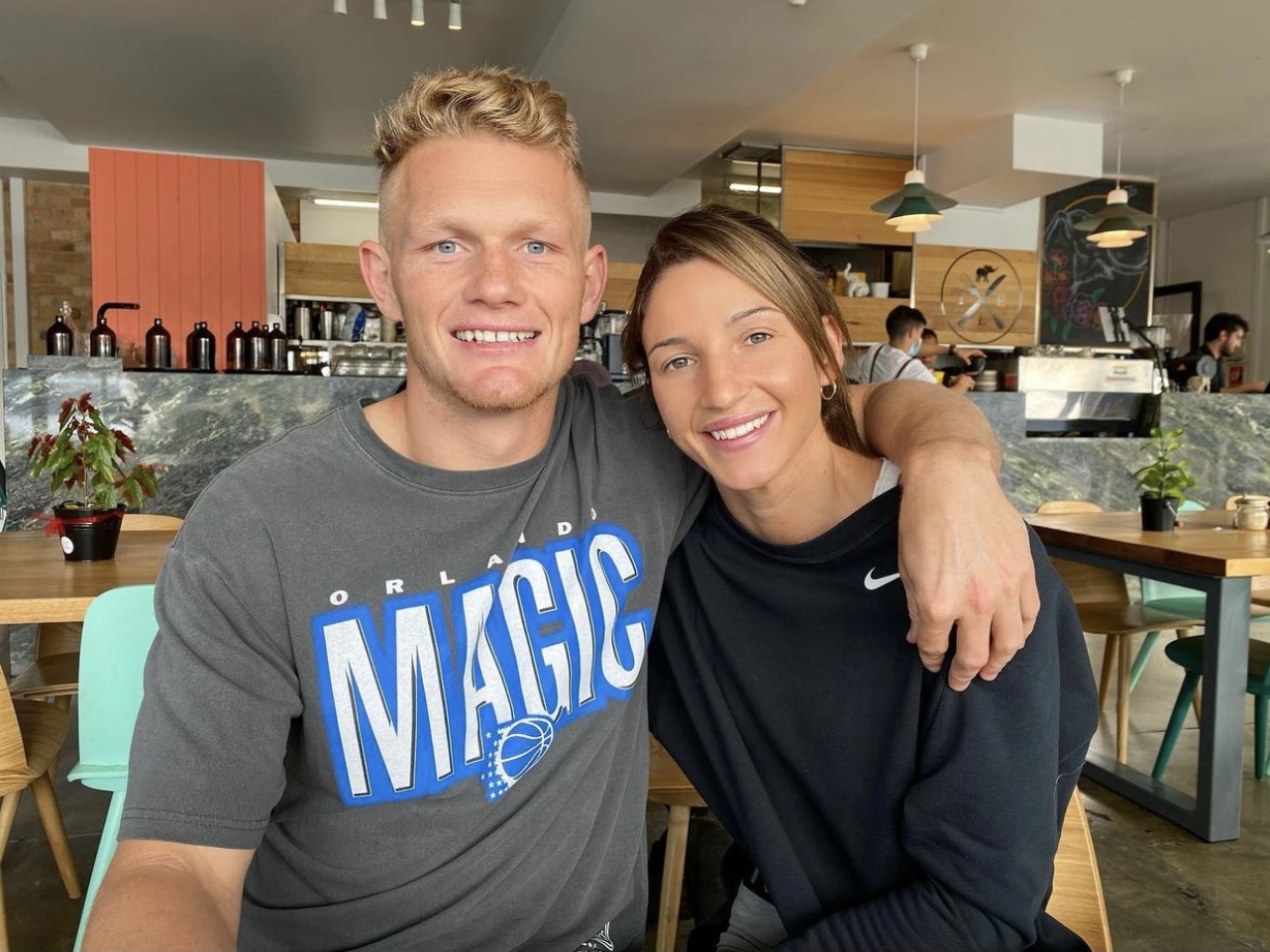 With limited time as an elite netballer and priorities that always put netball first, Kim wanted to make sure Adam was in it for all the right reasons.

After hearing his story and how he grew up, Kim knew he was, “more than a footballer, he was a really genuine person.”

“Turns out he was the perfect fit, I guess we kind of gravitated towards each other and if anything made each other better – I just knew he was the one.”

In the space of a few months at the end of 2019 and start of 2020, our sporty couple got crackalackin’ – announcing the exciting news of their pregnancy and engagement.

On the 23 March 2020, Georgie Olive Treloar graced the earth, leaving her Mum and Dad absolutely smitten. 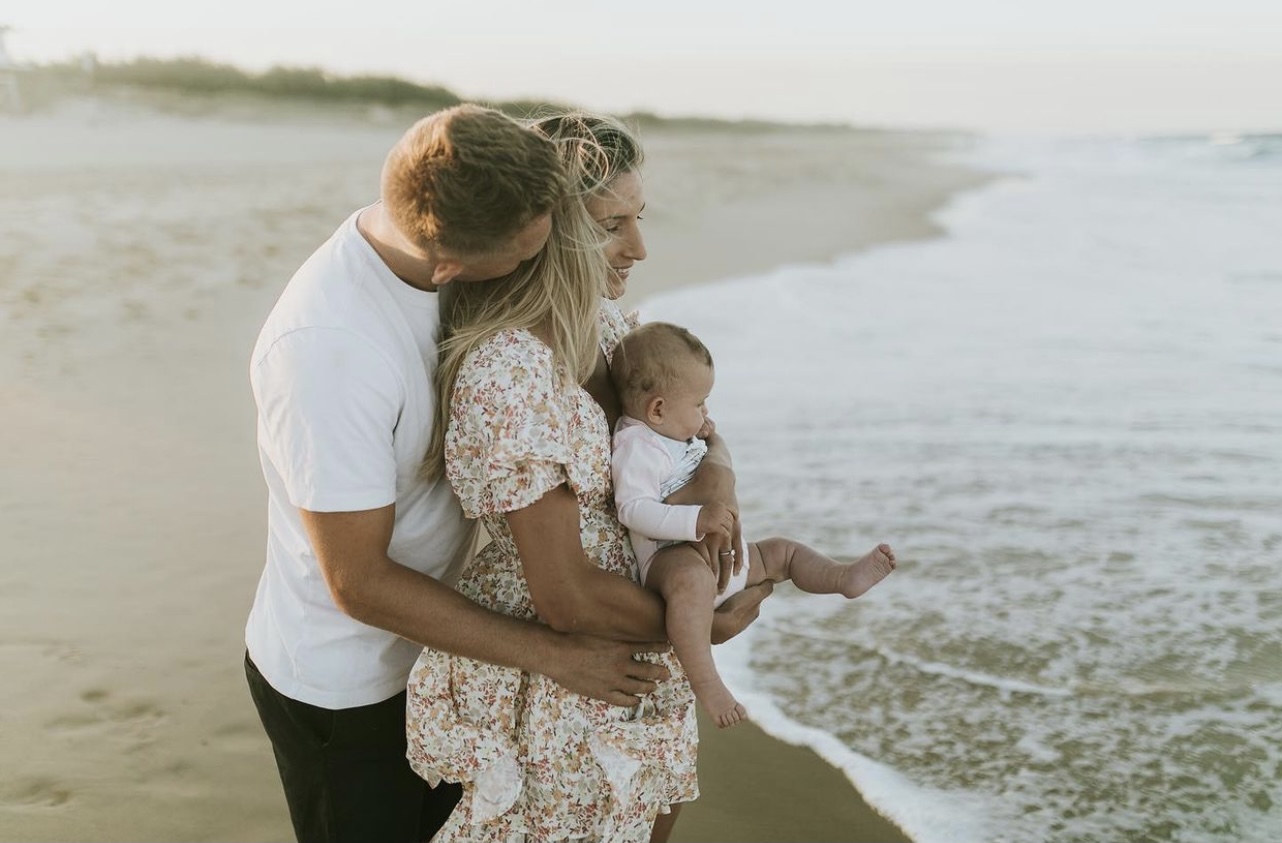 Although there is a plane trip now between the couple and their daughter, they are making it work.

“Adsey doesn’t see G all the time, but when he does, she’s always like ‘Daddy!’ and I think that just warms his heart. People always say, ‘it must be so hard being in different states with a child,’ but at the end of the day no one knows how Adam and I work, only we do. We make it work.”

“We’ve only got a career in sport for so long, so we want to make the most of that and if anything, encourage Georgie to chase her dreams just like her Mum and Dad.”

Although a tricky decision at the time, Kim “wanted to love netball again and the only team I wanted to play for was the Firebirds.”

After recently completing her first pre-season with the Firebirds as a Mum, Kim said without all the support around her, she wouldn’t have been able to do it.

“Being a Mum and a netballer has it’s challenges, trying to get the balance right can be tricky. You come home from training and you’re tired, but you want to be there for your daughter.”

“But I feel like I’ve got so much support around me, I’ve got my Mum, the girls, all the coaching staff and everyone at the Firebirds, it’s been such a smooth transition. I’m very lucky to have the support, wouldn’t be able to do it if I didn’t.” 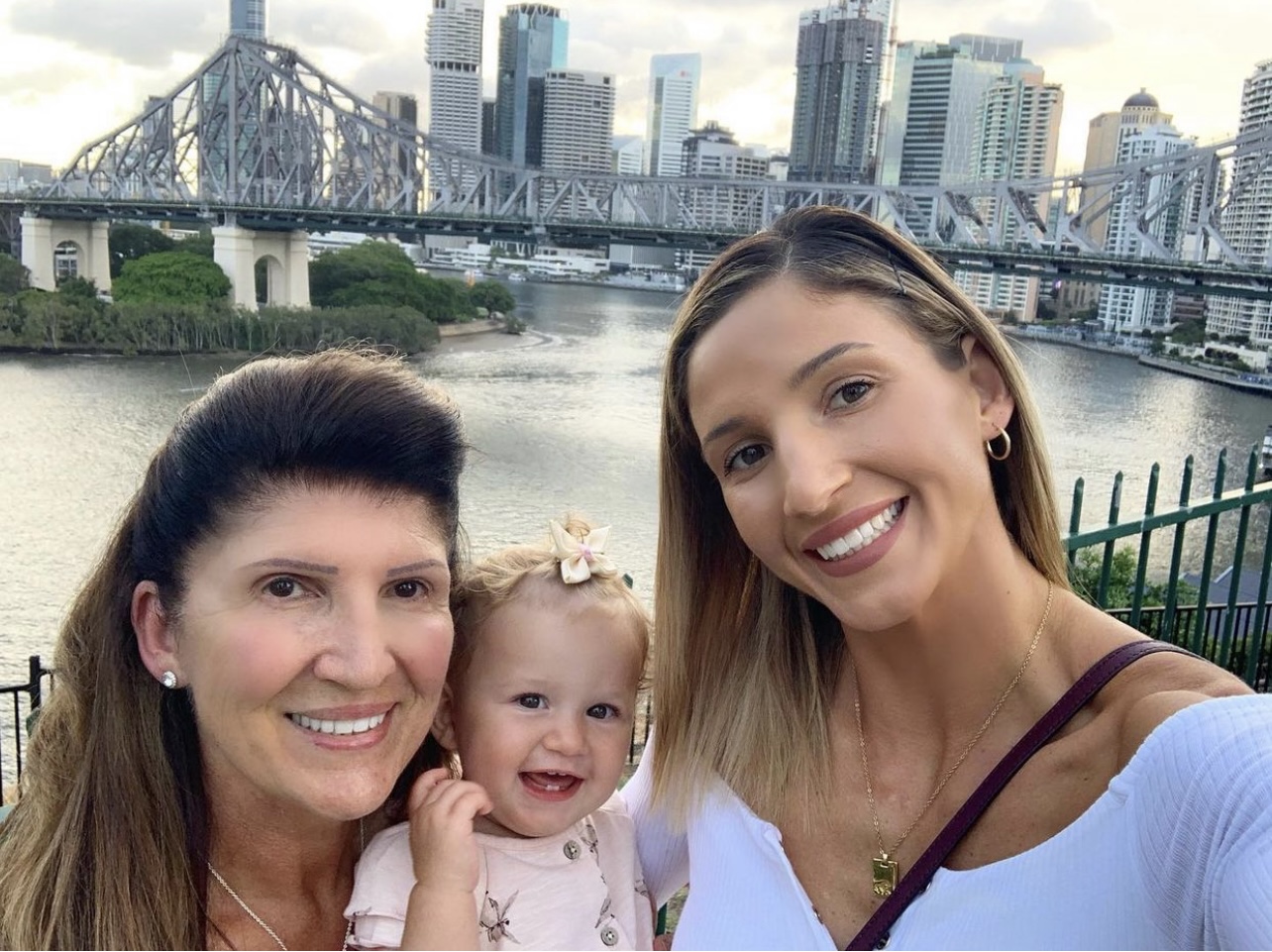 This year is quite special as Kim is joined with another teammate who has also recently become a Mum.

“It’s been good being able to connect with Gretel because she’s going through the exact same thing, we can kind of lean on each other.”

“You’ve got your hormones raging, your breast feeding, so if you want to cry you’ve just got to cry. At the end of the day our prized possession is our children and that will always be our greatest achievement.”

Kim is smashing it in mum-life and netball-life; however, the list of achievements doesn’t end there.

Along with sister Jess, Kim created her own side hustle that uses her background in personal training – Ravs Fitness.

“Ravs Fitness is where I write programs for pregnant women, post-natal and just the general population through online workouts.”

“I run it with my twin sister, it took off over the COVID-19 lockdown period last year, where people were struggling to go to gyms. So, we shared online programs and got a lot of good feedback from it, I love it.”

On days off, Kim likes to spend time with her little girl as well as, “getting outside and embracing nature. I also love going to the beach, and just switching off from the hustle.”

With the focus on the upcoming season, commencing this Sunday, as the Firebirds take on the NSW Swifts at 1pm, Kim is just a little excited to be back in purple.

Our returning Firebird will hit the court this season not only as a player, but as a leader where she joins Gabi Simpson and Tara Hinchliffe in the leadership team.

“I am so keen to be back in the purple dress, I mean Laura Geitz came and spoke to us the other day and reminded us how much of an honour it is to put the purple armour on.”

“Hopefully I can give back to the club that gave me so much. I am very excited; we’ve got a really awesome group of girls and I can’t wait to create new memories with them.”