“I think it’s pretty amazing my family and I are part of such a special and rich culture that has been around for over sixty-thousand years, and the fact that our culture is still really strong, is something I’m proud of.”

Jemma Mi Mi, a professional netballer, exercise physiology graduate, wife and proud Indigenous Australian is not only taking the Suncorp Super Netball stage by storm, she is inspiring young Aboriginal and Torres Strait Islander girls across the country to chase their dreams.

Incredibly quick and devastatingly creative, Jemma will enter her fifth season with the Queensland Firebirds this year.

“My Dad was in the army growing up, so we moved around a lot. I was born in Newcastle NSW, then moved to Townsville, Canungra then Brisbane,” Jemma explained.

Coming from a tight-knit family of four girls, Jemma reminisced on the days where her Mum (Monica) would be looking after the girls while her Dad (Jim) was on extended overseas trips with the army.

“He worked in infantry, which was frontline work and did this for over 20 years. He’s out now which is good and works instead as an Indigenous liaison for companies around the community.”

“Dad is Aboriginal and that’s where I get my Aboriginality from. My tribe is the Wakka Wakka tribe, which starts up near Gayndah, four hours north west of Brisbane. But I’ve also got family ties to the Goreng Goreng tribe in Bundaberg.”

Jemma explained how the two tribes are bordering towns, and how it’s quite common to have connections to more than one tribe.

Recently Jemma made the trip north to, “visit lots of different sites around Gayndah, where I saw a couple of family members too, which was nice.”

“We’re planning to go back up again soon and take the drone out, because there’s this cave that my Dad’s great grandpa used to live in years ago, that we want to try and uncover.”

As a proud Aboriginal woman, Jemma is passionate about delving deeper into learning and educating people around her history and ancestral story.

“I’ve realised now that by being a role model for young Indigenous girls coming through school or the netball pathway, I can hopefully inspire them to achieve their dreams and goals.”

She is doing exactly that. Jemma is an ambassador and community leader with Netball Queensland’s Diamond Spirit Program, targeted at creating a culturally safe environment for young Indigenous girls. 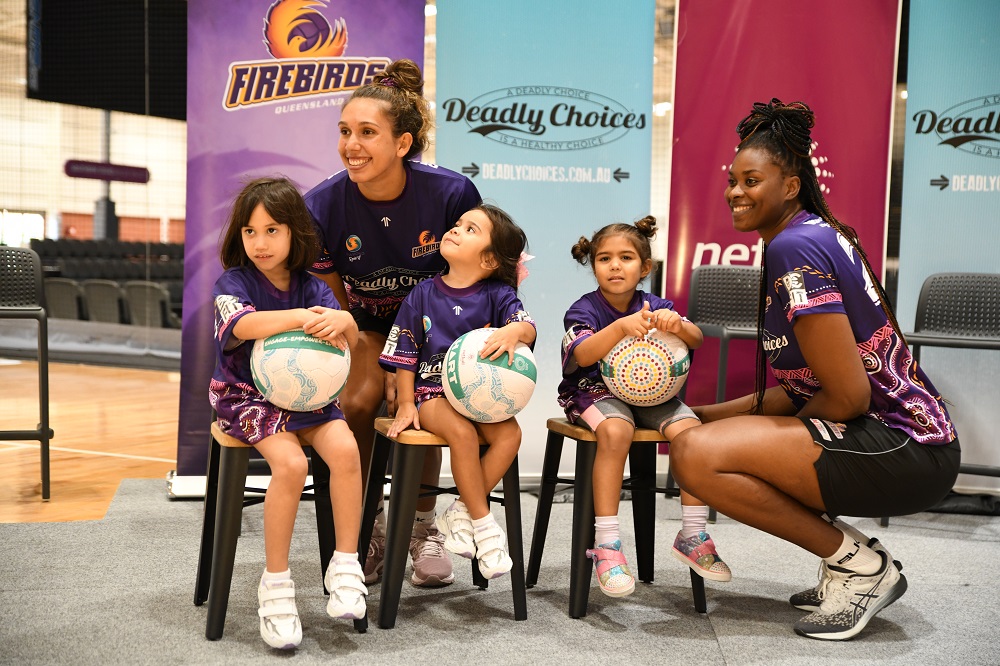 “I absolutely love being a part of the program, it has helped me to go own my own cultural journey as well as facilitating a safe place for discussions about our rich culture and what they might be learning about at school.”

Although Jemma wishes she could spend more time visiting remote schools with the program, she has been kept busy back in Brisbane after recently completing her Bachelor of Clinical Exercise Physiology.

“I’m really passionate about using exercise as a medicine for all different types of people. But I’m actually thinking about potentially going back to Uni and studying a Master of Teaching.”

“Teaching is always something I wanted to do but didn’t because mum’s a teacher and she said it’s always pretty tough. But working with the Diamond Spirit Program as well as coaching, it’s definitely something I am really interested in doing.”

2020 proved to be a busy year for our do-it-all athlete, where she not only finished a crazy season of netball and a university degree but walked down the aisle to marry the love of her life, Grant.

The former Australian touch football representative met her match on the grassy Redlands touch footy fields and hasn’t looked back since.

“I think Grant had a crush on me throughout high school, but I had a boyfriend at the time. A few years down the track, we bumped into each other at The Normanby Pub and our friendship rekindled and our relationship then moved quite quickly.”

Much like Jemma’s dad Jim, Grant worked for the army as well, where they both did “long distance for the first couple of months while Grant was in Melbourne working. I remember how excited I used to get every time a text from him would come through,” she said with a smile.

Jemma is incredibly family orientated and finding someone who was the same was something she valued highly.

“Seeing Grant connect well with his family and how well he got along with mine, was something that made me think he was the one…not to mention how he can always make me smile, even when I’m at my angriest.”

At the end of last year, Jemma and Grant had their happily ever after, fortunately tying the knot after a questionable year of COVID weddings.

“It was honestly the best day of my life; I was smiling the whole time.”

Excited for the season ahead, Jemma is really looking forward to working with Megan Anderson and her team of knowledgeable ex-netballers.

“The coaches have really embraced our young group so far, and I’ve already been instilled with lots of confidence. It’ll be awesome to see where we’re at over these next few weeks and the practice matches coming up.”

“It’s also been really nice having my sister Leesa around the Firebirds environment, not to mention lots of little kiddies around, like Bobby, Georgie, Hazel and Tommy, it makes the squad feel like one big family.”